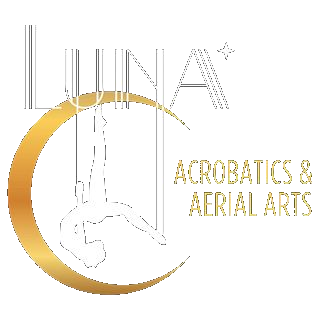 Fenella was a gymnast when she was younger. Not just in the gymnasium, but at the park, on trees, door-frames, the stair banister you get the idea. At the age of 28 Fenella discovered aerial acrobatics and trained at Paradise Fitness, where she learnt the aerial hoop, trapeze, silks, pole and acrobatic gymnastics.

Fenella loved aerial so much, that she decided to become an instructor at the studio she trained. Unfortunately the studio closed down, Fenella and her fellow aerialists and acrobats had no where to go! In February 2018 (with the official launch in April) Fenella opened Luna Acrobatics and Aerial Arts.

Fenella has participated in a variety of events including shows at Luna Acrobatics and Aerial Arts, summer and school fayres around the Stubbington area, Victorious Festival in Portsmouth, Gabefest in Southampton, Circesque in Essex and at the Gothic Circus on the Isle of Wight.

Fenella competed at the International Pole and Aerial Tournament in the intermediate aerial hoop category in 2016 coming 3rd.

Alongside running her school - Luna Acrobatics and Aerial Arts, Fenella is a performer and instructor at Top Banana Circus based in Portsmouth. Fenella predominately teaches the aerial hoop, but also at children's events teaching the tightrope and ground skills such juggling, and plate spinning. Fenella also teaches at the Classique School of Dance in Waterlooville.

There is not a governing body for aerial and acrobatics; however Fenella has attended a variety of training events to keep up to date. This includes a beginners aerial hoop instructors course at Spin City in Newbury, aerial and pole for children by X-pert training, rigging for aerial studio owners by Total Solutions. Fenella has also attended aerial training in France with established aerial circus instructors Akasha Dryden and Carrinan Binjj and the Manchester Aerial and Acrobatics Convention where experts from the circus industry teach a variety of workshops.
;